Skip to content
Please note that these words weren’t originally going on my blog, but I felt there’s no better place to express myself and be brutally honest than on my website. 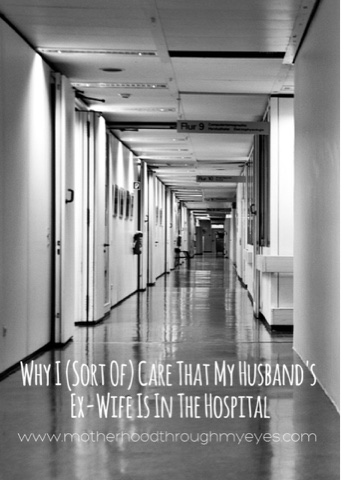 I got word early January that my husband’s ex-wife was in ICU and I felt a bit sad.
She and I were starting to be more cordial with one another and then BAM, she had an accident and was sent to the hospital.
I knew her cousin — who is my husband’s brother’s wife — was dealing with all the paperwork and I couldn’t even begin to imagine her pain as she watched this woman in a coma.
Why I Don’t Care As Much
I never liked my husband’s ex-wife, not because she’s his former spouse but because the day I met her she disrespected me. I know, most people just turn the other cheek, but I believe that if you put someone in their place when they try to step on your toes, they’ll learn to never *mess with you again.
I met the ex-wife last year on Christmas Day, and that’s when she chose to disrespect me — on a beautiful holiday.
So, this year when she came back to the U.S. for the holidays, I got word that she would be staying for at least 5 months. I thought, great. Good for her! And then life just went on.
But Then Karma Came
I ran into her a couple of times before her accident and I was cordial. I spoke to her when she spoke to me and I said hi and bye when need be. That’s how you know I don’t care much for a person.
She went on a bike ride and either a car hit her or she lost balance and fell.
Bruised and swollen, that’s how she looked when my husband and I went to see her the Sunday after her brain surgery.
On the day of her surgery, I had my husband’s nieces over. They were worried about his ex-wife, who is also their cousin. I did my best to make them smile, but I knew fear of the unknown was on their mind. They didn’t know what to expect out of this accident, so I took out plain sheets of paper and markers. I told them to write her something so that when she wakes up, she has something to read/look forward to.
The girls loved the idea and went to work. It was nice to see them excited.
Talking About It
My husband and I have discussed the situation a few times and agree we feel bad for her, especially now that she was ACTUALLY starting to come around and be more humble. You know, the whole “I found God” speech. We hope she finds strength to recover. The doctor said she’s doing well, but I haven’t heard anything from anyone about her progress so I’m guessing “no news is good news” in this scenario.
The good thing about all this is that the accident has given her more time in the U.S. and with her family. Her boyfriend has been my her side the entire time, which is really sweet because he’s been dating her for less than two months. If anything, all this will strengthen their relationship, even if it turns into a friendship.
Do you think I’m wrong for only caring a little that this woman is at the hospital?